It may sound like an Italian mime, but MU-MIMO is one of the key technologies driving the development of high-performance, next-generation wireless networks.

MU-MIMO stands for Multiple User - Multiple-Input, Multiple-Output. MU-MIMO is the next generation of SU-MIMO (single user) or just plain-old MIMO. It is most commonly used to let WiFi routers connect to multiple devices in your home at the same time. Starry also uses this tech to help power our fixed wireless network to deliver high-capacity internet access to your home (aka: super fast broadband).

Yes, it’s complicated, but MU-MIMO is making life for all your connected devices (15 or 500) less complicated. Much more useful than an Italian mime.

If you live alone and have just a few devices connected to your WiFi at a time – your phone or laptop – your videos and email should load quickly. There is very little traffic heading to and from your router, so they could take turns. This is how things used to work.

But if you live in a multi-person household with a plethora of devices – a smart tv, laptops, tablets, phones, Alexa, Nest, Ring or even a smart toaster – making everything wait their turn means a lot of waiting. You will probably start to notice lag time. This is when MU-MIMO comes in handy.

MU-MIMO supports environments where (surprise!) multiple devices are trying to access the network simultaneously. Each device can send and receive information at the same time, at equal speeds. Importantly, if you are using multiple devices that have two transmitters and two receivers (like most smartphones), MU-MIMO matters much more to prevent lag time.

This is simplifying a lot, but basically, regular old MIMO would mean if five users attempted to access a single frequency, they could only be allowed through one at a time - kind of like this. A MU-MIMO transmitter can break up the available bandwidth into individual streams that share the connection equally, instead of creating a queue.

What else can MU-MIMO do?

Just like how the antennas within your router switch seamlessly between your devices, Starry uses a version of MU-MIMO called massive MU-MIMO for our wide access network (WAN). This is executed just as easily as your router handles all the devices in your house. Our Starry Beams can send and receive data from other rooftop antennas simultaneously. 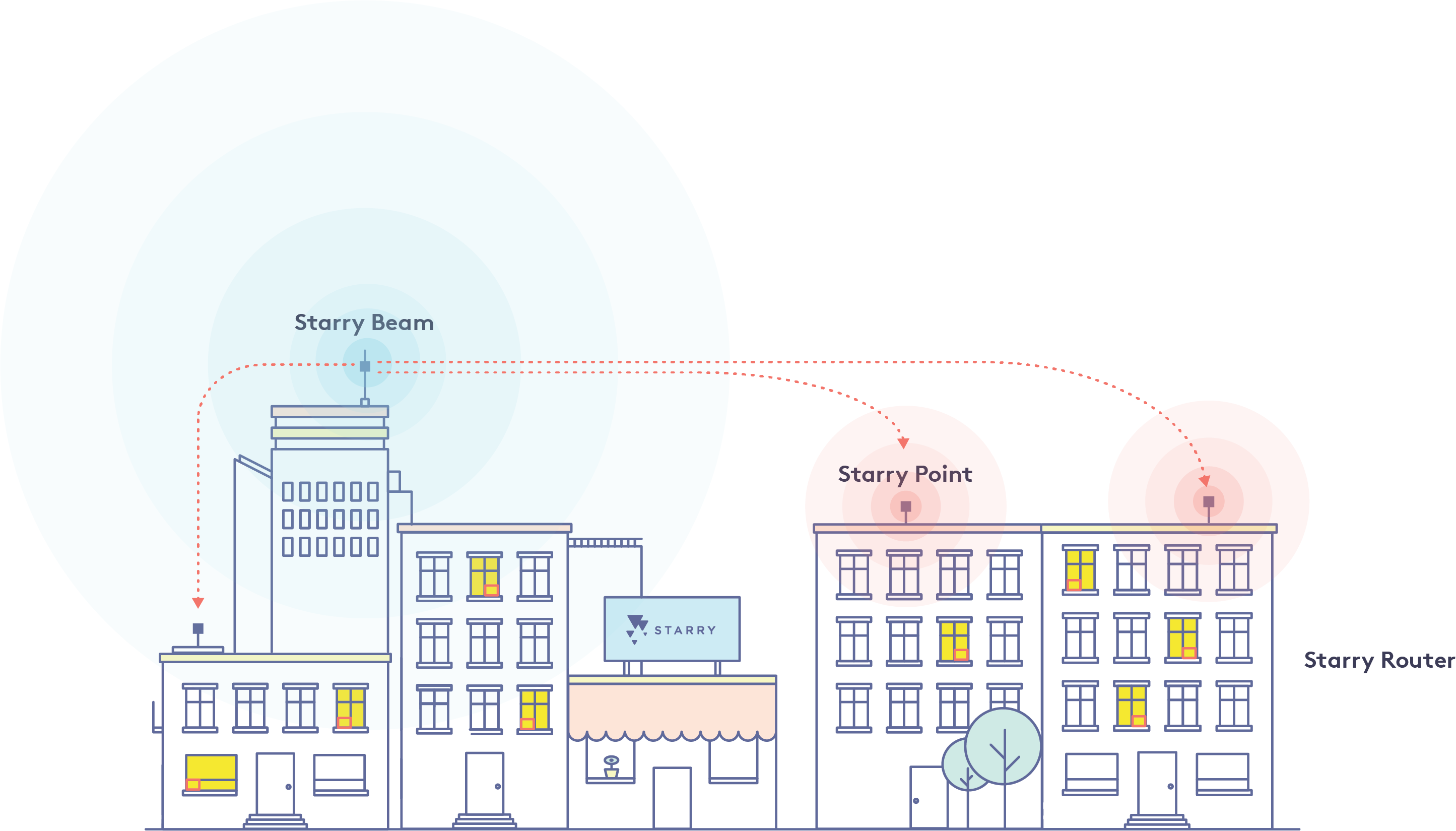 MU-MIMO and massive MU-MIMO are paired with a technique called beamforming, which allows an antenna to transmit radio signals from one location to multiple specific endpoints, instead of aimlessly around an entire area. This directed point-to-multipoint communication creates a stronger, better, faster wireless communication (someone let Kanye know). That means we can get you lightning-fast internet, starting at the top of a building all the way through your router to your wireless devices. Whoa.