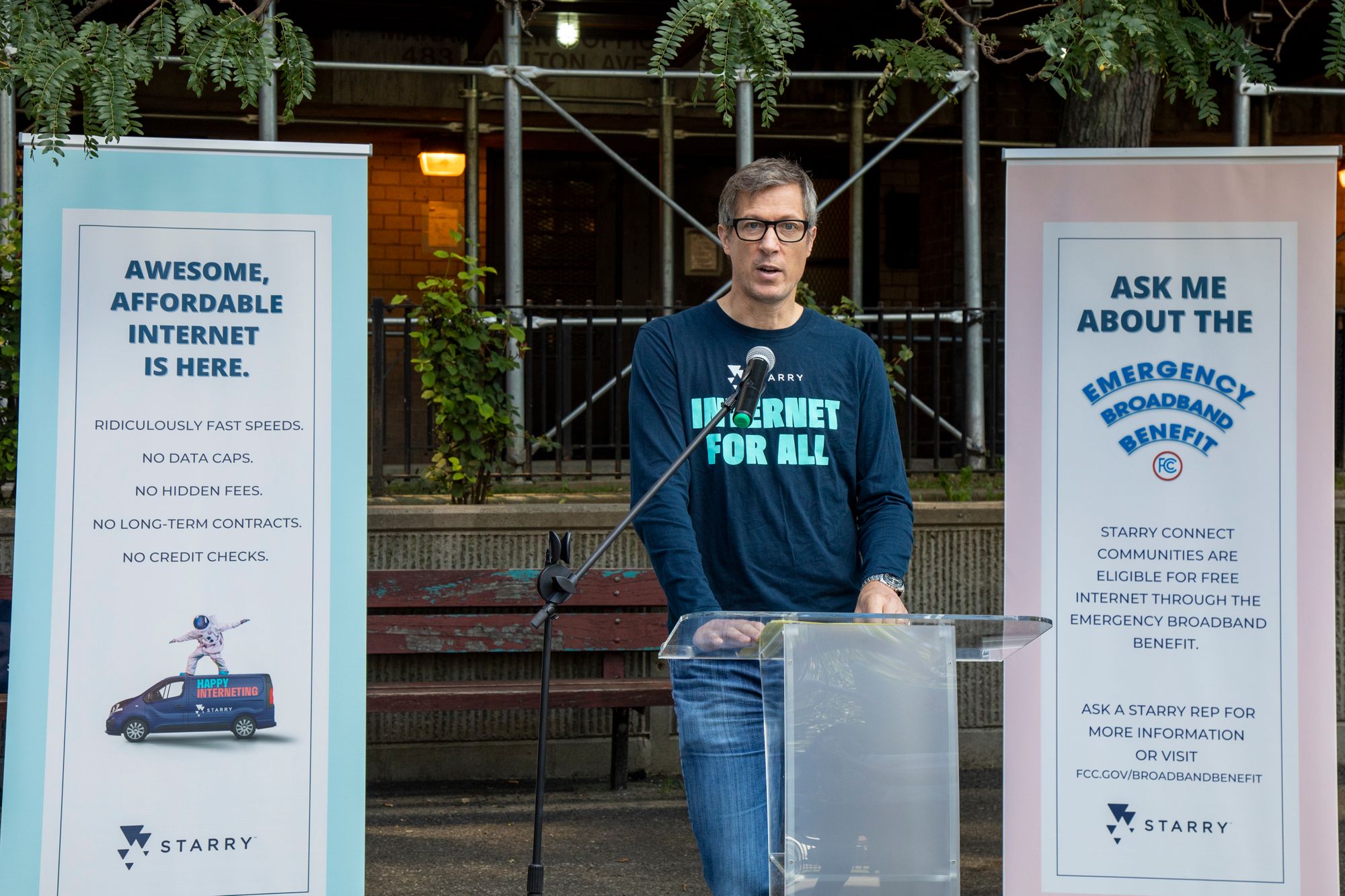 “When you’re in this kind of David and Goliath journey, you really want to build a company that's top-to-bottom focused on serving customers better than anyone else in the industry.” –AMB

Launching a successful, ground-breaking tech company is never easy. Doing it twice (after the Supreme Court shuts you down the first time) seems almost impossible, unless you have a great team that is able to learn the right lessons along the way.

Alex Moulle-Berteaux, Chief Operating Officer (COO) for Starry, is one of 20 founding members of Starry that previously worked for Aereo. He joined the upstart OTT service by way of Rockstar Games, where he served as Global Head of Marketing, and before that Media Arts Lab/ Chiat Day, where he worked closely with then Apple CEO Steve Jobs on Apple’s global marketing campaigns across all products.

Inspired by the groundbreaking entrepreneurs he had been working with, Moulle-Berteaux decided to branch out and look for a mature team that was doing something exciting, one where his commercial, marketing and customer focus experience could be additive.  By the time he hooked up with Chet, Joe and the team at Aereo, the engineering strategy, legal and business strategy for the burgeoning company was already in place.

“They had all this entrepreneurial experience, technological and engineering experience. What they were doing was groundbreaking and potentially history-making, so I was excited to join up and contribute to the effort,” said Moulle-Berteaux.

Bringing Aereo to market, at a time when streaming services were still nascent, would require additional innovation, beyond the technical, to shift consumer behavior. Basically, the goal was to teach consumers how to (and that they could) consume content in new and different ways.

“A lot of our work was on, ‘how do you think about customers in a way that’s different from the incumbents?’” said Moulle-Berteaux, who was tasked in large part with developing Aereo’s go-to-market strategy nationwide. “Our passion around customers came from our work creating distinction between us as a disruptor and the incumbent services. When you’re in this kind of David and Goliath journey or battle, you really want to build a company that's top to bottom focused on serving customers better than anyone else in the industry.”

“As a team, we spent a lot of time developing user experience on streaming hardware and mobile,” said Moulle-Berteaux.  “We understood what content was watched synchronously and asynchronously; and we wanted to make live TV more compelling.”

The plan worked. Aereo grew exponentially in a short amount of time, proving the technical expertise and customer-experience focus of the team was on point. But when you’re a modern day David (Aereo), taking on a modern day Goliath (the broadcasters) it isn’t as easy as wielding a sling-shot—especially when Goliath brings a phalanx of lawyers.

Though the Aereo story didn’t end the way many of us (including our subscribers) wanted, this “anti-incumbent” approach to delivering service, in addition to helping the consumer better understand the importance of their in-home broadband service from a technical standpoint, became the biggest foundational lessons from Aereo in Starry’s development, said Moulle-Berteaux.

“At Aereo, we were delivering a TV streaming product and we had customers that would call us and say ‘your service isn’t working or it’s buffering.’ But actually, it was their internet service at the time,” said Moulle-Berteaux. “Latency, wifi performance, the ultimate service experience of what people cared about, all of that understanding came from delivering our TV streaming service to hundreds of thousands of people in 12 markets.”

For Moulle-Berteaux and the rest of the Starry founding team, the Aereo experience proved there were significant inefficiencies in the broadband market that needed to be addressed. As the early concept for Starry began to take shape, everything from naming the company, to pricing, to delivery, technology – and yes, the customer experience – was developed with a passion for serving the consumer better than what existed.

“We looked at every aspect from sign up, plan presentation, install scheduling, wifi speed testing, to customer care and how we supported every aspect of internet service and connected devices,” said Moulle-Berteaux.

The team focused early on in creating transparency for the service. And importantly, creating a service platform with end-to-end control, so they knew of service performance issues before customers could experience them.  Ensuring this kind of transparency of service and quality of service was a core goal on day one.

The incredible speed at which Starry was able to execute on its strategy was due in large part to the size and expertise of its founding team. Together, they represented multiple disciplines and their shared experiences from Aereo gave them a leg-up on launching a much bigger, more complex endeavor.

“The founding team was excited about the work we did at Aereo, very disappointed in the outcome, and motivated to do something even more ambitious and more impactful next,” Moulle-Berteux said. “And the reason we could was because we had such a unique set of skills that were coming together.”

The Starry founding team still heads up some areas of the company’s business today, a testament to the passion and commitment that drove Aereo’s early success. That continuity in leadership, and the ability to build on the lessons learned from Aereo, allowed the team to have a clear vision across all aspects of the business from the start. This in turn fostered the accelerated growth the company has enjoyed since launching its initial service offering in Boston.

By fall 2015, Starry was already selling its newly developed, proprietary WiFi router (Starry Station) on Amazon, just one year after the company’s founding. By late 2017, a mere 3 years from the start of R&D, the company began serving trial customers on licensed millimeter wave spectrum (spectrum once regarded as ‘unusable’) using technology built in-house by the Starry team from the ground up. Today, Starry’s service covers more than 5.3 million homes in six major markets, with an expansion roadmap that will take the company to more than 40 million households nationwide.

“We weren’t constantly reinventing and pivoting, like a lot of other start-ups,” Moulle-Berteaux said of Starry’s early days. “For a tech company, our first few years were so incredibly productive because we had a clear view of what we were trying to accomplish.”

For Moulle-Berteaux, starting a company with this momentum meant the ability to credibly go after one of the biggest and most lopsided industries and use technology to solve the barriers that enabled broadband companies to form near monopolies in the United States.

“The end of Aereo was difficult, but it set into motion this next great chapter,” said Moulle-Berteaux. “I’m a firm believer that you learn more from your failures than you do your successes - the key is taking what you learned to heart and not repeating mistakes.”