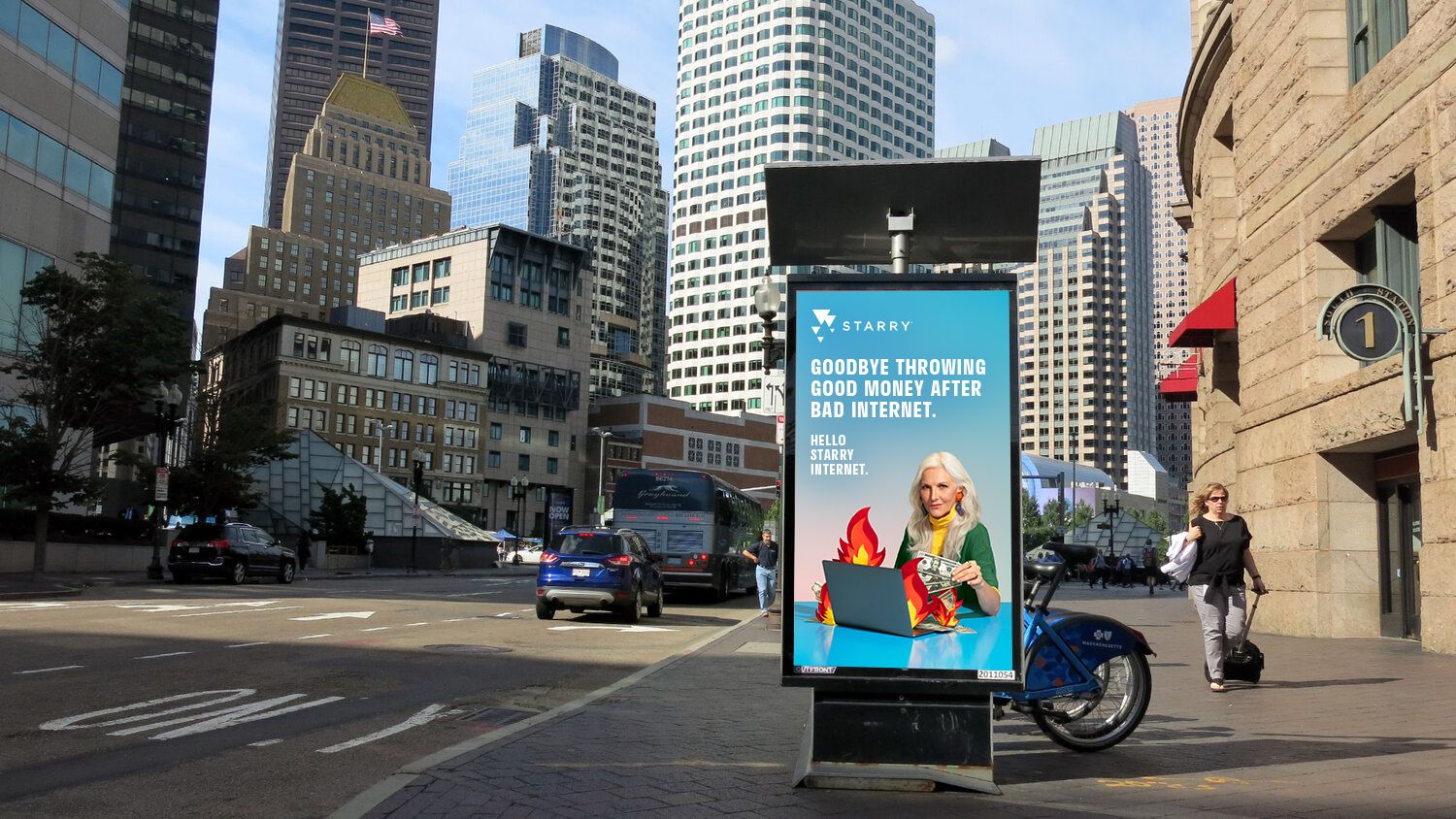 “From a brand perspective, it’s all about ease of use. Internet service shouldn’t be complicated–it should be delightful and easy to understand. And what makes Starry special is that we’re thinking about ease at every level of the business. That’s one of the most powerful parts of our brand.”   -Jane Huschka, VP of Brand & Creative

Building and establishing a new brand–in an industry sector largely controlled by near-monopoly incumbents–can be an exciting, yet challenging endeavor. Revitalizing an existing brand that’s caught in the middle of a Supreme Court case is something else entirely.

Jane Huschka, Vice President of Brand and Creative for Starry, has done both. Huschka is part of the team that co-founded Starry after Aereo (Starry’s spiritual predecessor) had its over-the-top streaming TV service unceremoniously shuttered by the U.S. Supreme Court in 2014. As Lead Brand Designer for Aereo, she was tasked with evolving the company’s look and feel at a time when the burgeoning service was facing an existential legal threat.

“I ended up at Aereo a year before everything came crashing down,” said Huschka, who joined the company after six years at RED Partners, a branding agency in New York City. “We operated the business with the firm belief that everything would make its way through the courts and that we were ultimately going to be successful. Then all of a sudden, we went from moving 100 miles an hour to a complete stop.”

It took several months for the Aereo team to digest the company’s all too quick ending, though the gears began turning almost immediately on a possible next chapter. “When the doors closed on Aereo,” Huschka remembers, “I went home, set-up my computer, and began working on the earliest pitch decks for Starry–but this was before it was even called ‘Starry.’ At that point we were still brainstorming names for our next company.”

Post-Aereo, the Starry Founding Team had one major realization – the telecommunication landscape desperately needed an ISP that was willing to put the customer experience at the forefront in every way. This customer-first focus, combined with the overarching belief that broadband internet should be accessible and affordable for everyone, would serve as the North Star for the development of their next endeavor. It was an innovative concept, but without the right branding, this still-to-be-named company would have trouble finding its footing against the established goliaths in the broadband industry.

“The thing about a ‘brand’ is, it takes an army to make it,” Huschka said. “It’s not just about colors and shapes or words; it's the actions of the company that make it work.” And the actions of this new company needed to be completely different from anything that came before. The Founding Team was determined to deliver a superior broadband experience from top to bottom—faster speeds, better customer care, no contracts, no data caps, all at a super affordable price—and the branding for this new company would need to reflect that mission. Few if any innovations have had the capacity to change lives like the internet, and capturing that transformative essence would be key to developing the company’s look and feel.

But nothing could happen until the company had a name.

The process for coming up with “Starry” was, by all accounts, a saga. Turns out, coming up with the right name for a new tech company can be as difficult as mastering the advanced technology behind its concept.

“We knew the idea was ambitious. That our wireless tech coupled with a superior experience would be critical to our success. So we wanted to capture all of that: wireless, innovative, optimistic, effortless. To create a name that felt like an empty vessel that we could fill with meaning as the company and our products evolved,” Huschka said. “So we started trying to name ourselves, and everyone was coming up with names; I was coming up with names, Alex was naming, even at some point the engineers were coming up with names. We spent months going through this activity, pinning ideas up to the wall of a WeWork, highlighting the best ones. But there was never any consensus, someone (usually legal) always said ‘No.’”

The process dragged on for months, until Huschka suggested bringing in Anthony Shore, a naming expert known for coming up with the right one-word selling points for companies. Shore offered another hundred names for the team to consider, including Starry, which stood out for its feel and unique connection to the technical innovation that underlies the company.

“We selected Starry because it's positive, it’s bright, it's ethereal like our technology. There’s no one in the world who would think negatively of Starry,” Huschka said. “It’s ambitious in a way. So that became our name, and from there we began developing our visual identity.”

With a name now in place, everything started to come together. Huschka and her team developed a color palette to accentuate the positivity the name Starry evoked, with optimistic, bright colors creating gradients similar to the sky during dusk and dawn.

Early iterations of the company logo also began to take shape. Logos, in the best of times, are always a challenge, but the fact that Starry could be literally translated to a shape meant the team looked at a LOT of bad logos. “At one point, an agency we worked with sent us a book of hundreds of logos that ALL used stars. It was too much,” said Huschka. “We met with designer James Spindler nearly the next day.” Spindler came up with the right combination of simple, sleek and timeless for the company’s first logo, which utilized triangles in honor of the company’s first WiFi router.

“Starry Station was iconic,” Huschka said. “At the time, we wondered if it was a bad idea to create a logo that looked like our first product knowing that our routers probably wouldn’t look that way forever. But the mark itself was so elegant and sophisticated, with the movement of the triangles almost feeling like something coming together. It really captured the feel of our technology and the simplicity of everything we try to do.”

The last thing to fall into place was Starry’s tagline, “Happy Interneting.” Which was developed by freelance writer Dan Morales who was working with the company around the time it officially launched. The idea was to capture the entirety of the Starry experience, while coming up with a turn of phrase that could fit anyone’s definition of what a positive internet service experience should be.

For Huschka, “Happy Interneting” is not just a company tagline: it's an entire brand platform.

“Everything we do creatively stems from this idea of, what does internet service that's better to buy, better to set-up, better to experience feel like? ‘Happy Interneting’ is our articulation of that. It’s our sign off” she said. “With Aereo, the way we used to have to describe our service was always convoluted and had a lot of legal restrictions. With Starry, its internet service you’ll love. That’s it. It’s simple. And with brands, which are all about creating memorable experiences and shared meaning, the simpler the message, the better. Which was why when we launched our service, we launched with what seemed novel at the time – one simple plan.”

By eliminating the bundles, contracts, hidden fees and added taxes, Starry had left prospective customers with only the good stuff: lightning-fast, incredibly reliable, awesome internet service. The clarity and ease of having Starry Internet immediately resonated with the consumer, and continues to be a company trademark.

“The thing that we really strive to do–and I think a lot of competitors are starting to take notice–is go out of our way to make things clear,” Huschka said. “We don’t use jargon. We don’t try to sell people things they don’t need. We want to make sure our customers have the information they need to make the choices that are right for them. We want them to feel like they’re joining us in this journey.”

But breaking through to new customers in a world dominated by unpopular ISPs presents its own set of challenges. In addition to providing outstanding service, the Starry team was also tasked with undoing years of customer mistreatment by the larger incumbents, who routinely failed to meet customer needs while consistently raising their prices, often with little to no transparency.

“Expectations are rock bottom for this category. The incumbent ISPs have mistreated people for so long that it sometimes just sounds too good to be true to the consumer, and that’s a challenge for our brand,” Huschka said. “But what we’re offering is not too good to be true–it’s real. So you have to always be able to back that up every step of the way, which is easy when your Trustpilot score is 4.4. We have so many quotes from our customers saying they finally love their internet service thanks to us, and that’s so gratifying.”

“From a brand perspective, it’s all about ease of use. Your internet service shouldn’t be complicated–it should be delightful and easy to understand. For the Starry team, we’re thinking about ease at every level of the business, and that’s one of the most powerful parts of our brand.”

Customer focus and simplicity have been a powerful one-two punch for Starry. The brand’s ability to look and feel completely different from any of its competitors has allowed the company to carve out a significant market share in a short amount of time, one that continues to grow every day. And as the company has grown so has the branding, which Huschka notes has become more confident and bold over the years, while still leaning heavily into the accessibility and humanity of the company mission.

“We’ve definitely evolved from where we started. We’re still smart and sophisticated, even if we’re having a little more fun. We don’t just want to say we’re ‘customer first,’ we want people to feel it and connect with it.”