Game Changer: What You Need to Know About Google Stadia

Imagine you’re playing your favorite video game in glorious 4K, with high powered processing that never lags. Then your phone buzzes; it’s time to leave for work. Until recently, your only options were to press pause, accept a compromised mobile version to keep playing, or skip work and get fired. But not anymore...maybe.

Thanks to Google Stadia, you’ll be able to seamlessly take the game with you, by streaming through the Chrome browser to your mobile device. Which means instead of picking up a portable gaming console (ahem, Nintendo Switch), that limits the quality of the game when you’re at home, your game can be the same quality on your PC, TV, tablet, or smartphone.

Called the “Netflix of Online Gaming,” Stadia promises a cloud computing power equivalent to that of a console running at 10.7 GPU teraflops; that’s more than the PS4 Pro and Xbox One X combined. More flops equals better graphics, which means gaming on Google Stadia is supposed to look and perform like a high-end gaming PC. Bypassing the need for traditional hardware, Stadia could change the game, but there are still some questions that need to be resolved.

How is Google Stadia going to work?

Stadia will be available in various editions, starting with the premium Stadia Founder’s Edition. For $129, Google will send you a limited edition controller and Chromecast Ultra for a gaming experience on your television. It comes with two free months of Stadia Pro for you and a friend; but if you’re looking for a lower price point, a standalone Stadia Pro subscription is $9.99/month.

While previous game streaming efforts have struggled with high-fidelity visuals and laggy low-frame rates, Google is confident their existing global infrastructure will provide sufficient support. Stadia games will be run through Google’s data centers on PC components and then spit back to devices around the world.

According to Eurogamer, “With Stadia, the 'client' running the game experience is effectively a peer of the server, running on the same network with a high bandwidth interconnect. This could lead to massive improvements in player count, world simulation quality and physics.” 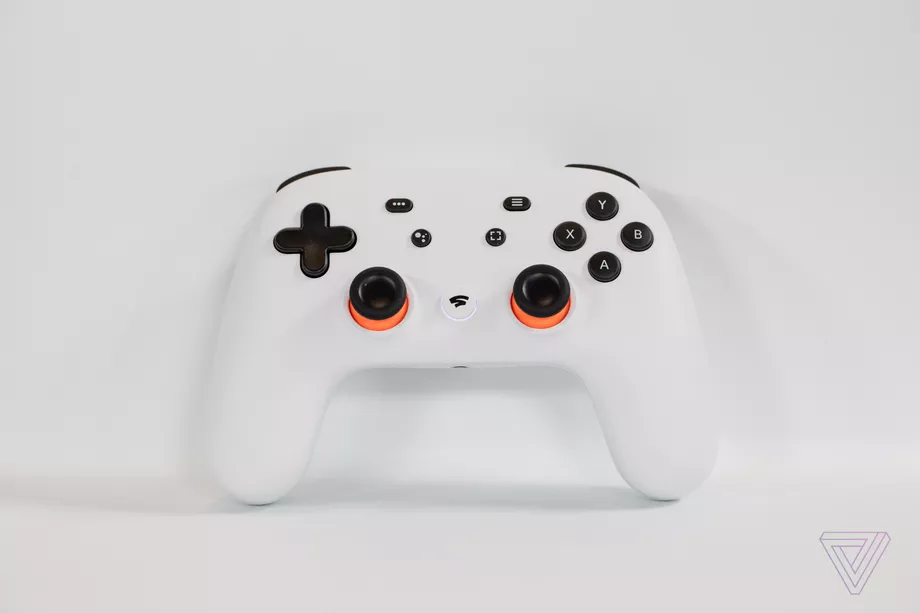 Google says gamers will get 4K resolution with 60 frames per second, HDR, and 5.1 surround sound. Eventually, Google hopes to support 8K resolution and 120FPS. If this seems like a tall order, that’s because it is. So, let’s dig into some of the details.

First off, you’ll need a healthy amount of bandwidth to make this work. In fact, before even logging into Stadia, Google will make players take a speed test so they can be prepared for a good (or bad) gaming experience. Generally, you want 35mbps up and down but for a better understanding of the recommended capacities, Google created this handy-dandy chart: 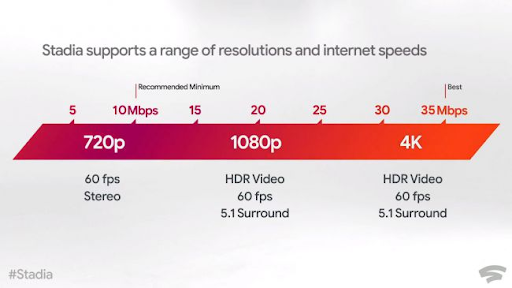 Because of the speed limitations, it’s unlikely that gamers will be able to have a quality experience in public spaces, e.g. coffee shops, during a commute, etc. So, like traditional gaming which requires a console, for a quality gaming experience, Stadia will need to be played at home - and only in homes with reliable high-speed internet...Yes. This kind of defeats the purpose of Stadia. Insert eye-roll.

If you have an unlimited data plan, you could move any games from a computer or television to your phone. But...would you even want to? Mobile games are architected for specific screens and control inputs and the same goes for PC games. That said, if you are a big on-the-go gamer, you probably already play the world’s most popular games on your phone without Stadia (ahem, Fortnight, Hearthstone).

Users without unlimited data plans should watch their data consumption, as the service could burn through it all quickly. Streaming Stadia at 4K 60 fps for 65 hours will use 1TB of data. In a world (and with an internet provider) without Net Neutrality, gaming on Stadia could get very expensive very quickly if you get charged for data overages.

(Psst. We will never ever ever do that.)

Luckily, there is time before Stadia launches to sort through some of these challenges: double-check your contract with your internet provider for data limits. Monitor your internet performance through speed tests - be sure to check upload and download speeds. If you find your service isn’t up to snuff, maybe it’s time to consciously uncouple...

Google released Stadia to gamers for testing and the initial reviews are good. Scheduled to launch November 19th, 2019, Google wants to make online gaming easier, more available, and more accessible for all through Stadia...stay tuned to see if it actually works.